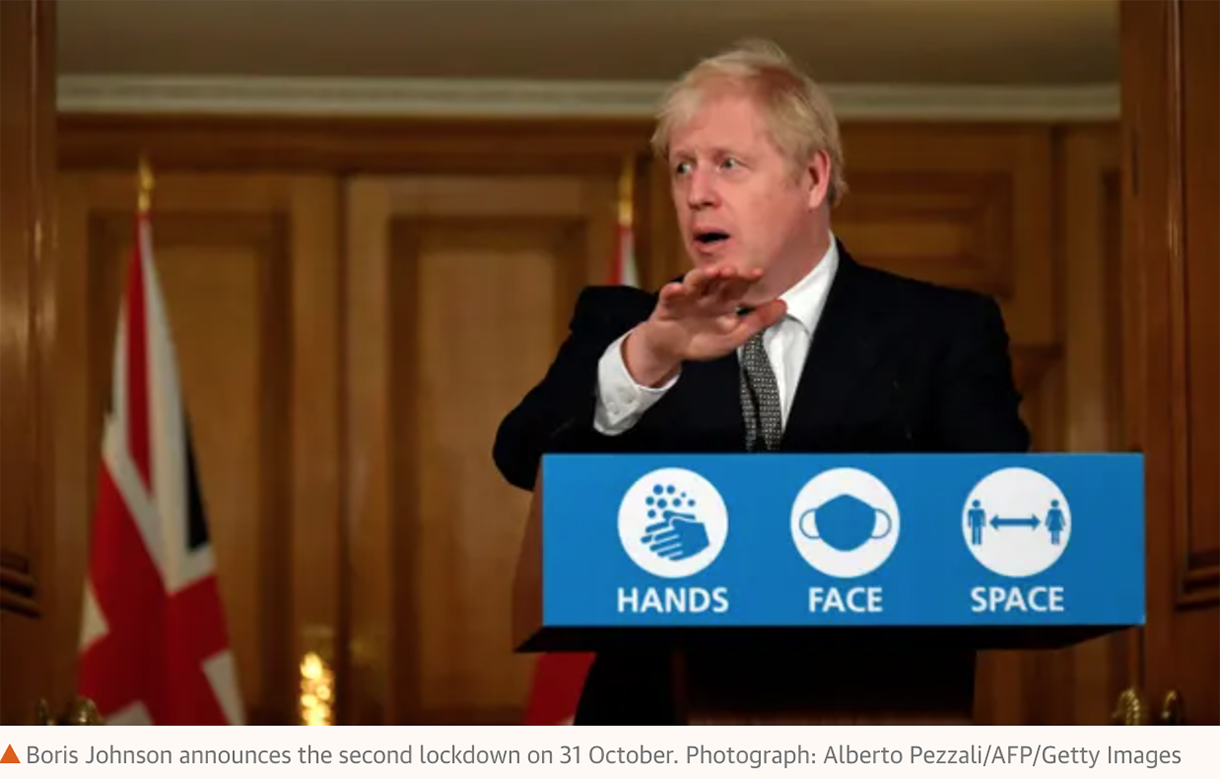 Aleak inquiry? The looming lockdown was no state secret, as everyone had watched the graphs of doom ticking upwards daily: Ipsos Mori repeatedly found a majority of British people urging stricter controls. What was the cabinet doing all summer?

That picture of the mask-free chancellor serving Wagamama plates for his “eat out to help out” disaster may be a career-killer, seeing as how he urged everyone into hot pubs and restaurants with the virus still in the air: his scheme alone raised infections by up to 17%. He sent up the party-time flares and plane-loads of holidaymakers flew off to enjoy the Spanish nightlife. Eat, drink and be merry, for tomorrow …

The Covid deniers still make idiots of themselves: as the latest issue of the Spectator hit the news-stands challenging the emergency science group Sage’s “reasonable worst-case scenario”, the daily figures overshot that hypothesis at warp speed. But that didn’t stop the former Tory leader Iain Duncan Smith protesting in the Sunday Telegraph that the prime minister had “given in to the advice of his scientific advisers” – those damned experts – again.

It didn’t take prophetic genius for Labour’s Keir Starmer to urge Boris Johnson to follow Sage’s mid-September advice for a two-week circuit-break while schools were closed for half-term. Nor does it take a crystal ball to predict that this fatal delay means an even longer lockdown, continuing beyond 2 December, is near-certain.

Only NHS England chief Simon Stevens’ stark Halloween warning of ice rinks being requisitioned for morgues forced Boris Johnson and Rishi Sunak to act. They had learned nothing. Johnson pretended English exceptionalism would magically hold back the second wave. Now, months after everyone else, he is “humble in the face of nature”.

The failure of privatised test and tracing to find people hardly mattered when fewer than 20% of people obey orders to totally isolate once infected. As a result, that £12bn has been “totally wasted”, Prof Susan Michie of Sage’s behavioural subcommittee tells me. She Zoom-meets other countries’ experts to hear what works. Britons dismiss foreigners, but the ingredients are simple and universal: effective isolating means no need for lockdowns, she says. What works is not our government’s threat of £10,000 fines, but care and kindness.

Today’s ComRes snap poll shows 72% of English people support lockdown, so why is compliance so weak? Michie says it’s not rebellious ravers but mainly people who can’t afford to stop work. Our £95.85 weekly sick pay is the lowest in the OECD: Slovenia pays 90% of wages; even the US now pays 100% of wages.

Yet here, 2 million people earning less than £120 per week don’t even get sick pay, so a message from a call centre to isolate has a weak effect. A minicab driver is reluctant to name his equally impoverished friends as contacts. Those who can claim universal credit face a five-week wait, or a loan that will take a year to pay off.

Give people the help they need and they will stay at home, but that takes not a Serco phone command but local, knowledgable tracers to care for the isolated. People need warm blankets of support. Likewise in schools, yet the government wants a culture war with teachers instead of treating them with the same compassion and praise as NHS and care staff. Prioritise schools for these fast, frequent tests, nurture staff and children sent home – this time give each child a laptop – with top-quality nationally streamed classes.

We should expect more pandemics, possibly far worse, and the World Health Organization is warning of an anti-microbial resistance plague that would turn everyday infections lethal. Donald Trump shut down the US Emerging Pandemic Threats programme just before Covid-19 arrived. Its chief virus hunter now warns the FT: “There will be another event – it’s already out there.”

Prof Gabriel Scally, the president of epidemiology and public health at the Royal Society of Medicine, recalls the bravery of Liam Donaldson, the chief medical officer who forced Margaret Thatcher, against her strong will, to confront HIV/Aids. Why didn’t Sage stand up as forcefully for an early lockdown? Why were our chief medical and scientific officers so passive with the politicians?

Medical miracles make headlines, but public health has saved more lives. Joseph Bazalgette extracted an unprecedented gigantic budget to build sewers that stopped cholera and typhoid. Johnson’s “build back better” wants HS2, but he should start with building back public health, where a real “levelling up” would put the causes and effects of poverty first.